Sustainability Through Solar Energy and Bitcoin

British-born solar entrepreneur Abraham Cambridge will talk about how we can upgrade the world’s financial and energy systems in one fell swoop.  Abraham is the CEO of The Sun Exchange, a platform that combines cryptocurrency and solar energy in order to create a solar-powered financial system that streams monetized sunshine across the world in Bitcoin.  He will present a demo of The Sun Exchange’s proof of concept during the conference.

The Sun Exchange aims to allow anyone in the world to own a commercial solar panel installed in optimal places throughout the world.  The project resembles a sharing economy for solar panels, so that panels and generators are installed on roof spaces where they will be profitable, and then listed for buyers on The Sun Exchange, representing a 20-year income stream in Bitcoin from sustainable energy.

It should surprise no one that the traditional financial industry is heavily invested in fossil fuel-based enterprise.  Therefore, reasons Abraham, it would be a more natural fit for decentralized financial systems to support the decentralized ownership and distribution of decentralized, renewable energy.

Silicon chips have humble beginnings. They’re made from sand, a simple material that makes up over 90% of the Earth’s crust. But when we combine the semiconducting qualities of silicon chips with infinite sunshine and a finite cryptocurrency in a decentralized system, they can solve many of our planet’s greatest challenges.

The benefits of harnessing a steady supply of (practically) infinite, clean solar energy that gets steadily cheaper over time are obvious. We can grow more stuff and make more of it for less money without polluting the planet. We can produce greater yields of higher nutrient-rich food, grown indoors where pesticides and herbicides are not required — most likely a necessity in a world where climate change could make agriculture a frivolous pursuit in large parts of the world in the not-too-distant future. With enough surplus energy we can sequester carbon dioxide from the atmosphere. The captured carbon can be used to manufacture vast quantities of graphene, a biodegradable semiconductor and building material, with which we can make even lower-cost solar cells and lightweight, strong materials for air and spacecraft.

The benefits of a finite monetary supply are less obvious but made clear by an early public statement by bitcoin creator Satoshi Nakamoto on a web forum on February 11, 2009. Satoshi said: “Instead of the supply changing to keep the value the same, the supply is predetermined and the value changes. As the number of users grows, the value per coin increases. It has the potential for a positive feedback loop; as users increase, the value goes up”. The feature of there only ever being 21 million bitcoins gives us the confidence that the value will keep rising. The utility of the Bitcoin protocol allows us to transfer value around the world peer-to-peer in minutes, and as more people use it, the Bitcoin price is driven up. This price increase is already happening if you ignore shorter-term market corrections.

Abraham Cambridge is a British-born solar entrepreneur and disruptive technologist. In 2008 he completed an MSc in the Science of Climate Change under a NERC scholarship at UEA and has since established several businesses and projects around the world that use solar energy as a means for creating positive change. In 2010 he pioneered utility-scale solar in Britain and in 2012 one of his businesses, The Renewable Energy Co-operative, was nominated ‘International Co-operative of The Year’ in the United Nations Year of Co-operatives. Abe now lives in South Africa, a country with an abundance of sun and from where he launched the cryptocurrency-based solar energy finance company, The Sun Exchange, in 2014. 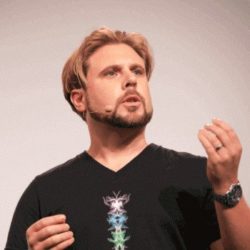