Adventures in IPFS: Building the Next Generation of Decentralized Apps

Bitcoin Wednesday on 4 September, 2019 proudly presents Textile CEO Andrew Hill with a demo of Textile threads, a decentralized database built on IPFS.  What is IPFS?  It stands for Interplanetary File System, and it’s a peer-to-peer decentralized network that stores and delivers data more efficiently than the centralized HTTP protocol currently used in web browsers.

While HTTP downloads files from a computer on the Internet one at a time, IPFS can retrieve many pieces of the same files from several machines simultaneously.  Its network has the structure of a distributed ledger known as a Directed Acyclic Graph, or DAG, which creates a universal file system served by a swarm of users, like file sharing with BitTorrent.  This process is more efficient and persistent and, without any single point of failure or control, it’s ultimately takedown resistant.

From before you even wake up in the morning, your day is encoded into digital data. In the early days of the internet, we were simply an IP address, nic, or maybe email address. Today, our data footprint has grown to include dating profiles, medical histories, mundane conversations, personality traits, and much more. While the streams of our digital data have become incredibly detailed, the technologies that leverage that data have become more opaque and less in our control.

Andrew’s presentation will explain this new paradigm for the Internet, and his demo will show how easy it is to use IPFS to create apps where users can own and control their own data.  His talk will also cover:

Andrew has been a biologist, a mapper, a professor, a developer, and an entrepreneur. Now he helps build Textile, a company that aims to create a decentralized iCloud, open to developers and owned by users.  He has a PhD in Ecology and Evolutionary Biology from the University of Colorado in Boulder, and served as adjunct professor at New York University, where he was specialized in data visualization, big data and the use of technology in scientific research.  He helped launch San Francisco-based Textile in January 2017. 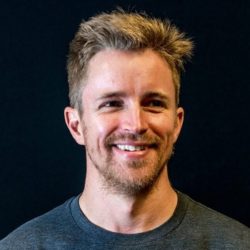