During Bitcoin Wednesday on 4 March 2020, Andy Bryant will present the latest developments at bitFlyer, one of the world’s largest cryptocurrency exchanges, and the market leader in Japan.  BitFlyer is licensed in Japan, the United States and Europe, including countries such as France, Italy, Spain, the U.K. and The Netherlands.  Due to the company’s top position in Japan, it’s also one of the largest exchanges in the world.

Andy is COO of bitFlyer Europe.  His talk will also include his predictions for the future of the cryptocurrency industry, and cover topics such as stable coins and Central Bank Digital Currencies, regulations, machine economies and the future development of the blockchain ecosystem.  He’ll also present bitFlyer and show off some of the features that make it a successful platform for so many users.

Andy’s career has encompassed many facets of finance and technology.  Before coming to bitFlyer he served as CEO of an AI startup and COO of the M&A advisory BDA Partners.  He also studied robotics in Japan and speaks Japanese.  He served as a robotics researcher and engineer for organizations such as the Tokyo Institute of Technology, a spin-off from MIT in Cambridge, Massachusetts and a startup in Bristol, UK.  He was awarded a scholarship from the Royal Academy of Engineering, and has had articles published in Coindesk, Wired, Yahoo Finance and Financial Times.  He earned a degree in mechanical engineering from the University of Bath with a dissertation about the application of decentralization in swarm robotics. 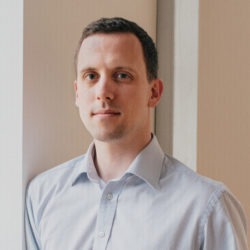