During Bitcoin Wednesday’s conference on 5 September, 2018, we will have the opportunity to listen to Dutch financial journalist Arno Wellens talk about what he believes to be another impending global financial meltdown.  His presentation, 10 Years After Lehman Brothers, will likely spark some discussion, especially since we are holding the event at ABN Amro headquarters, which was the nexus for the 2008 financial crisis in The Netherlands.

Those familiar with Arno’s work will likely recall that he was one of the instigators in 2016 of the successful national Ukraine Referendum that embarrassed EU leaders and Prime Minister Mark Rutte’s center right VVD party.  A year earlier he helped organize a more ambitious but failed national Peuro initiative against Dutch adoption of the European currency.  Although he was an original founder of the euro-skeptic Forum for Democracy party, he soon abandoned it, triggered by disagreements with the party leader Thierry Baudet about Baudet’s views on immigration and racism.

A self-described Ponzi expert, he writes about the European Union, international real estate and investment fraud, tax evasion, money laundering through the banking system and other financial quandaries.  He was the journalist who uncovered the Parex/Citadele scandal, involving an illegal bailout of a Russian-Latvian bank, which led to the Barroso investigation and involved the VVD politician Neelie Kroes.  He also predicted bankruptcies of more than a dozen major companies in The Netherlands including DSB Bank, Vestia and AFAB holding.  In 2010 the latter organization bribed his employer at the time, Quote magazine, which prompted him to stop working for that publication.

Arno is the author of The Euro Evangelism, a book that traces the history of the European monetary union, the banking crisis and what he views as financially unsustainable debt levels.  He has a degree in business administration from the University of Amsterdam. After an early career as a banker and an accountant at KPMG and Sony Benelux, he became an investigative financial journalist and editor for the aforementioned Quote, followed by the websites 925 and Follow The Money. 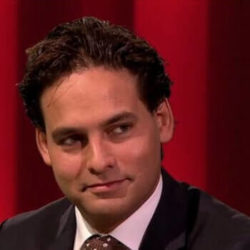