During Bitcoin Wednesday’s 6-year anniversary on 3 July, Leverj CEO Bharath Rao will give a demo and presentation on Ethereum Plasma-based decentralized exchanges.  The decentralized exchange, or DEX, aims to solve some of the biggest challenges in the industry, including fear of seizures, absence of reserves and regulatory obstacles.  It has been an important objective even before the failure of MTGox in 2014, and with recent hacks and increased focus of regulators on centralized exchanges, development of non-custodial trading solutions has only accelerated.

So far, poor UX and bad latency have held DEXes back from gaining substantial traction.  However, Leverj believes it can succeed in both of these areas.  It offers fast, decentralized trading with low latency between ether and ERC-20 tokens via a Plasma side-chain called Gluon.  Bharath’s presentation will explain how the Gluon side-chain enables rapid withdrawal by traders and quick, low-cost, high-volume trades.

Bharath has more than a decade of experience as a software engineer for JP Morgan, Goldman Sachs, Credit Suisse and Lehman Brothers, where he worked on Trading Desks, Reporting, Research, Foreign Exchanges and Equities.  He is both a trader and a techie with a combination of finance, legal and cryptocurrency backgrounds.  Before launching Leverj, he contributed to research and product development in Silicon Valley at General Electric and Motorola Labs. 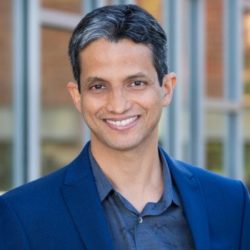