Christoph Auer-Welsbach is program director of Rockstart, which is one of Amsterdam’s best-known startup accelerators.  During Bitcoin Wednesday on 5 August 2015, Mr. Auer-Welsbach will give a brief introduction to Rockstart, its contribution to the startup ecosystem in the Netherlands and its experience with the cryptocurrency sector.  He will also explain what Rockstart sees as promising in this sector in the future, and plans to discuss what he believes to be the success factors for Blockchain technology companies in the early stages which are different from other types of startups.  He will also briefly address team aspects, the fundraising process for early stage startups in the sector and the current state for Blockchain-related companies in The Netherlands.

Mr. Auer-Welsbach is originally from Austria where he completed his education and earned a degree in economics, an MBA and a Masters in Public Administration.  He has worked as an investment manager for a private Austrian investment company, and as a founder for a number of tech startups including the NFC-based loyalty & payment solution, SpoonityInc, which is still doing well.  Before coming to Amsterdam he has been involved in developing and running startup accelerators and innovation programs such as technology initiatives, incubators, accelerators and hackathons in both London and San Francisco.  Outside of his career he can be found spending time with his wife and children, his Siberian husky and hobbies which include snowboarding, hiking and motorcycling. 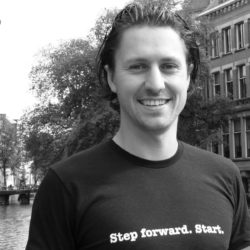