Slockit CEO Christoph Jentzsch will speak at Bitcoin Wednesday on 5 February, 2020. He was part of the Ethereum Core team starting in 2014 when he was responsible for securing the protocol. He also wrote the code for TheDAO, one the earliest decentralized autonomous organizations, which became a watershed in the history of the industry.

TheDAO, which he created in 2016, raised $150 million, the world’s largest crowdfunding at the time. It set a benchmark for what could be achieved with Ethereum’s smart contracts before it was hacked and shut down via the controversial hard fork that resulted in the Ethereum Classic blockchain.

At Bitcoin Wednesday Christoph will talk about his recent work on key management, decentralized identity and blockchain-enabled smart cities.  He will also explain project Incubed, a minimal verification client that enables low-memory IoT devices to connect to multiple blockchains.  Incubed’s stateless design allows it to verify transactions without synchronizing with the network.  The vision is to create a sharing economy with IoT devices in which transactions are recorded on the blockchain.

Christoph has a degree in theoretical and mathematical physics from the Technical University of Dresden, where he was also a Research Associate in Computer Science.  He later conducted research for The Leibniz Institute of Polymer Research.  He has been a software engineer since 2012.  In 2014 he became the Lead Tester for Ethereum Core, and founded Slockit, a platform for the decentralized sharing economy in 2015.  In 2019 Slockit was acquired by the U.S.-based Blockchains LLC, where Christoph currently serves as the Senior Vice President of Technology. 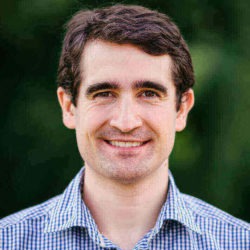