Daniel Diaz is responsible for the Dash cryptocurrency’s business development.  Dash is currently the 6th largest cryptocurrency in the world by market cap (at approximately $14 million) out of a field of about 500. It currently trades at 1/100 the price of Bitcoin.  Wired called it “Bitcoin’s nefarious cousin” because it was designed to be anonymous, unlike Bitcoin, which in contrast is actually completely transparent and traceable.

At Bitcoin Wednesday on 7 October, 2015 Mr. Diaz will give a presentation on “Dash Fundamentals.”  He writes:

For a decentralized digital currency to be viable the Dash team believes it needs to succeed in four categories:  First and foremost, it would have to support decentralized management, funding and decision making.  Second, it would have to maintain a good incentive model to ensure a robust infrastructure which includes mining and the operation of full nodes.  Third, it would have to provide features that are valuable to end users and which reflect the needs of the market in a user-friendly way.  Fourth, it would have to be innovative and be prepared to solve issues in a way that may go against established conventions.

Dash deals with each of these four areas in an original way, such that we believe it is able to produce the best possible results for both the users and the network. These categories are the “Dash Fundamentals” that I will be discussing during  my presentation.

Daniel is a serial entrepreneur with 10 years experience in sales and business development.  He owns a SAAS CPQ (configure, price, quote) company based in Los Angeles and Panama City that provides an online multi-tenant sales and proposal management tool.  He also owns a commercial distribution business based in Mexico City and Panama City that sells American electronics security equipment throughout Central America and the Caribbean.  Daniel studied electrical engineering in Panama City, where he currently lives and works. 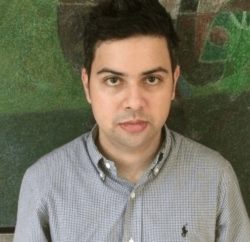