For Amsterdam’s CoinFest on 5 April, 2017 Dimitri Chupryna, co-founder of Token-as-a-Service or TAAS, will present the TAAS business model which is designed to allow investors to participate in the rise of blockchain markets without the technical barriers and financial risks associated with owning, transferring and trading cryptocurrencies.

TAAS bills itself as a “last-generation closed-end fund” that uses the Ethereum blockchain.  It claims to offer cryptographic audit technology to provide full transparency to its token holders via a set of autonomous auditing techniques that track, record and time stamp all trading activity.  TAAS’ goal with this auditing is to ensure that all transactions are properly recorded and transparent, and that the organization is in possession of its declared cryptocurrencies.  TAAS recently launched its crowd sale on 27 March 2017 and raised about $2.6 million in about a week.

Dimitri Chupryna is a co-founder of TAAS with experience in project management, data analytics and risk management.  He was previously a trader for a private cryptocurrency portfolio, and was involved in several startups in Silicon Valley, including the social app Spray.  Dimitri holds a degree in Economics from the University of San Francisco.  Outside of his work in the sector, Dimitri is fond of art exhibitions and contemporary electronic music. 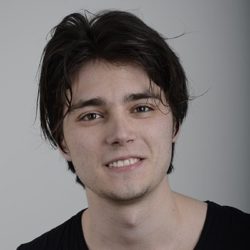