During the CoinFest edition of Bitcoin Wednesday on 5 April 2017, Dominic Williams, CTO of String Labs, based in Palo Alto, California, and Chief Scientist of DFINITY based in Zug, Switzerland will talk about his most recent work.  Dominic will present an overview of the DFINITY network for decentralized cloud computing.  The DFINITY Foundation raised a $3.75 million seed round for this project in mid-February, and plans to seek an additional round later this year after the test network has launched.

DFINITY is conceived as a sister network to Ethereum so that decentralized apps will work on both networks.  However, it replaces Ethereum’s “Code is Law” paradigm with an “AI is Law” paradigm: DFINITY introduces a decentralized governance solution called the Blockchain Nervous System through which critical decisions can be made.  The Blockchain Nervous System would — in theory — allow for hacks to be reversed, broken systems to be restarted, stolen tokens to be returned, malicious systems to be stopped and protocol updates to be introduced without hard forks.

DFINITY also introduces network protocols and crypto techniques designed to improve performance and scalability.  Many of these techniques are directly reusable within Ethereum.  DFINITY is contributing to work on shared components and other important upgrades in key areas such as P2P networking.

In his role as CTO of String Labs, Dominic serves the company as incubator and investor focusing on advanced, open protocol projects.  His work includes DFINITY’s Threshold Relay / Probabilistic Slot Protocol blockchain consensus mechanisms, the Blockchain Nervous System and the PHI “crypto fiat” autonomous loan issuance system.  He previously created Fight My Monster, an MMO game with several million users that was a pioneer in its use of distributed computing technologies, such as the Cassandra  database. 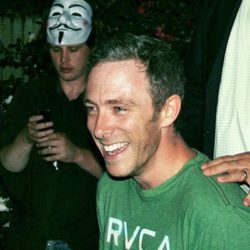