The Man Who Would Be Satoshi

Bitcoin Wednesday will present one of the most controversial and potentially divisive speakers in its nearly 6-year history on 1 May, 2019: Dr. Craig Steven Wright, Chief Scientist of nChain will give a talk about Bitcoin SV.  The subject of his presentation will be From DAT to BAT: The Future of Digital Audit Technology on Bitcoin SV.

“The Lightning Network is a system designed to allow criminals to purchase drugs and other illicit material and records being lost,” he writes, “but still settling on Bitcoin in such a way that they can avoid anti-money laundering rules.”  His vision for Bitcoin would appear to be a regulator-friendly solution with enhanced auditing capabilities.

Since 2016 Craig has attempted to convince the world that he was one of the first contributors to Bitcoin and is the person behind the name Satoshi Nakomoto, Bitcoin’s anonymous inventor.  The supporting evidence he has offered so far appears to have been disproven and is widely believed to be a hoax.  However, this year he has announced plans to prove his identity in court.  He has threatened to sue Ethereum Co-Founder Vitalik Buterin for defamatory comments, and has already filed a claim against podcaster Peter McCormack for libelous Tweets.  Both Buterin and McCormack have accused him of fraud for claiming to be Satoshi.  McCormack has offered to pay him £250,000 for $1 of Bitcoin from the Genesis block, a challenge that Craig has assailed as cowardly and meaningless.

The controversy doesn’t end there.  Craig is himself being sued for $10 billion by the estate of Bitcoin pioneer Dave Kleiman over bitcoins that the two men allegedly mined together between 2009 and 2013.  Responding to these conflicts, three well-known cryptocurrency exchanges, Binance, ShapeShift and Kraken, have decided to delist Bitcoin SV this year.  To explain the delisting Kraken in particular cited “behavior completely antithetical to everything we at Kraken and the wider crypto community stands for.”

Regardless of Kraken’s statement, Craig Wright’s appearance at Bitcoin Wednesday stems from our mission to provide an open — and uncurated — platform for all sides of the ongoing debate in the industry.  As we believe in a free and open society, Bitcoin Wednesday itself must be free and open, and it is therefore not within our ability to ban or censor Craig from Bitcoin Wednesday regardless of any strong feelings to the contrary.  The ability to fork and experiment with controversial ideas is an essential part of Bitcoin’s governance model, and open-minded curiosity toward conflicting visions is a feature of the industry, not a threat.

It is notable that Craig has successfully traded the intense criticism and controversy into substantial media attention for his work.  Between spring 2016 and late 2018 Craig was an advocate for the on-chain scaling solution that led to one of the 5 largest cryptocurrencies, Bitcoin Cash, a hard fork of Bitcoin with a market cap of more than $5 billion.  In late 2018 he led the Bitcoin SV camp in a hash war over the Bitcoin Cash network, asking miners to vote for the Bitcoin SV implementation of Bitcoin Cash.  The hash war ended with Bitcoin SV emerging as its own chain and cryptocurrency, which now represents a market cap of more than $ 1 billion which he claimed would improve on-chain scaling by adding even bigger blocks.  While Bitcoin’s block size is still limited to 1 MB, Bitcoin Cash has increased it to 32 MB and Bitcoin SV has enlarged it even more, to 128 MB, and plans to raise it even higher.  One of the most intriguing recent debates on very large block size surrounds their viability, in line with the recent contention made by Bitmex Research that the size of Bitcoin SV’s blocks lead to block reorganization and high latency that would render the network unsuitable for payments.

Craig Wright is an Australian computer scientist, businessman and inventor who has filed hundreds of blockchain patents for his company, nChain.  He claims to have been involved with Bitcoin since 2009, making him one of the industry’s earliest pioneers.  His vision is “a world with widescale adoption of both Bitcoin the cryptocurrency and the Bitcoin network as a transformative technology platform.”

Before his early work with Bitcoin he had more than 20 years experience in information technology and security.  His resume includes numerous academic degrees including PhD’s in Computer Science and Theology, a Master’s degree in Statistics and one in International Commercial Law, and 1200 IT security-related engagements for more than 120 Australian international organizations in the private and public sectors.  Among them are the Australian Stock Exchange, the Centre for Strategic Cyberspace and Security Science, SCADA Security, Cyber Warfare and Cyber Defense. He helped design the architecture for the world’s first online casino, Lasseters Online Casino, and advised Centrebet on security and control systems.  Craig has been a lecturer and researcher in Computer Science at Australia’s Charles Sturt University and has authored many articles, books and academic papers on IT, security, Bitcoin and other cryptocurrencies. 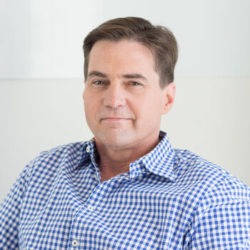