Cutting to the core of the discussion about privacy and anonymity in cryptocurrency transactions, SelfKey founder Edmund Lowell will return to Bitcoin Wednesday to talk about the progress he’s made on his decentralized identity solution.  He’ll also cover blockchain identity within the context of Europe’s GDPR regulations, security tokens and ICOs.  SelfKey raised $21.8 million during a token sale that ended in January 2018.

When the SelfKey wallet is created, a unique public/private cryptographic key pair is generated for one person.  This cryptographic system allows anyone to encrypt messages using the public key, but only allows the holder of the paired private key to decrypt the message, thereby leaving the owner fully in control.  This approach allows the individual to securely store and share digital identity information in commercial transactions.

SelfKey aims to make using identity information online seamless and safe.  Instead of providing your bank with a copy of your passport, with SelfKey you can simply sign a digital copy of your passport photo page with the bank’s public key, and deliver it via the SelfKey network.

Who Owns Your Identity?

Digital identities become more important the more our lives become tied to the Internet.  But as we do more online, our identities there need to be proven, mostly with identity documents that are often stored in giant, vulnerable, centralized databases.  Data breaches can expose people to identity theft since this information is attractive for hackers.  Third parties control our digital identity, and might misuse the information for commercial gain.  We also can share more information about ourselves and the people with whom we interact, which can also be compromised.

There are recent estimates showing that more than $40 billion is spent by organizations complying with financial know-your-customer regulations each year, in addition to the trillions of hours of associated time costs.  These expenses result from the challenge of quickly and easily accessing up-to-date identity data and validating it to satisfy their regulatory requirements.  Therefore, many organizations treat often treat an identity request as a “blank canvas”, a situation that forces them to initiate a new, fully-robust KYC process.

The central idea behind SelfKey is that the user can control his own digital identity which is secured by blockchain technology without the intervention of any trusted third party like a government or other entity.  “Self sovereign digital identity is a key to unlocking human potential and radically enabling financial inclusion,” Edmund writes. “It is one of the most important issues of our generation.”  The Facebook / Cambridge Analytica scandal has made the risks of the centralized storage of personal data crystal clear.

Edmund Lowell has been a serial entreprenuer living in Asia since 2011, and working at the crossroads of finance, technology and law.  Originally from the United States, he graduated from Northeastern University in Boston where he studied law, finance and technology.   He has built a number of Fintech and RegTech products during this time including Incorporations.io, KYC-Chain.com and The SelfKey foundation.  He has also provided KYC software for some of the biggest ICOs.

Edmund first appeard at Bitcoin Wednesday on 2 May, 2018 and spoke about: 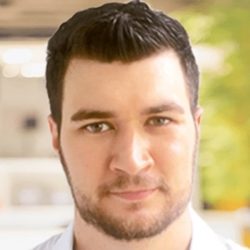