During Bitcoin Wednesday on 7 June, 2017, Egbert-Jan Sol, the CTO of TNO Industry gave this presentation about blockchain technology in The Netherlands.  TNO is a leading independent research institute for applied research and innovation in The Netherlands.

Are we facing the 21st century version of Dutch tulip mania?  Bitcoin’s price doubles in months, the price of Ether increases 10-fold. Start-ups are active. Large companies are building their own blockchain proof of concepts. Government policy discussions pop up everywhere. Nevertheless, academia and research institutes have already been active for years. Many of the key technologies including cryptography and distributed computing have been known since the 90s.

Yes, we are in a hype phase of the crypto-currency revolution, but there is also a fundamental paradigm shift taking place in ICT.

From calculating machines and computers with algorithms to interconnected computers managing databases, we are facing a phase where trust in digital networks becomes possible. On the Internet”nobody knows you are a dog”, but now we can introduce digital identities for humans, legal entities and objects. With these digital identities we can conduct activities, deal with value and store it in blockchains. The blockchain is a relatively new technology, not a disruptor, but its applications e.g. bitcoin will cause disruption.  In the same way, TCP/IP was once a new technology but within 20 years social media became the disruptor. We still need blockchain technology’s capabilities to improve, but the disruptors that it enables will cause very strong positive and negative effects. What is new, what can we expect, what will change in user, business and governmental relations and how can we prepare society?

Dr. Sol will address these questions in his talk.  He will also talk about:

Dr. Sol is the program director of Smart Industry, the Dutch Industry 4.0 program. He is also a part-time professor of research strategy at the Faculty of Science at Radboud University in Nijmegen. At the European level he is vice-chairman of EFFRA, the European Factory of the Future Association, and a member of the high level group of Manufuture. In The Netherlands he is a participant of the Nationale Blockchain Coalitie.

Egbert-Jan Sol (MSc and PhD Mechanical Engineering) started his industrial career as a robotics system architect, followed by a career as a software development manager at Philips and managing director of a 500-person R&D centre at Ericsson. From 1990-98 he was part-time professor of Technology Management at the TU Eindhoven. He is also co-founder and current chairman of the Digital City Eindhoven which he initiated in 1994. 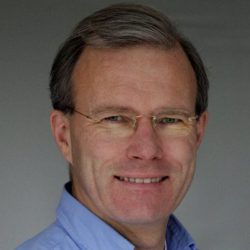