Emanuele Braga, Co-founder of Macao Center for Art and Research

The Macao Center for Art and Research

Emanuele Braga, co-founder of the Milan-based Macao Center for Art and Research, will be a panellist for Bitcoin Wednesday’s workshop on governance and the blockchain on 2 December, 2016.  The Macao Center has released  its own community cryptocurrency, the Commocoin, which has been built on the Faircoin blockchain, developed in cooperation with Freecoin and D-cent.  The organization derives its legal and fiscal status through the Freedom Cooperative, a European cooperative society that gives its members banking services and the ability to buy and sell products and services without having to register themselves as a legal entity in their own country.
After an initial air drop of Commocoin to collaborators and participants at the Macao Center, Emanuele’s team has been experimenting with using the cryptocurrency to pay for workers, access to events and booking exhibition and workshop time at the Center, among many items.  Governance of the Commocoin project is decided by consensus of a general assembly.  At the end of every month, all members of the Center’s assembly receive an equal basic income in Euro generated by the income of the activities of the organization.

Emanuele writes, “In a plausible future in which algorithms might control our economical, relational and spatial behavior, it will be a challenge to find a way to question these systems without creating a democratic deficit as a collateral effect.  As automation begins to replace more of the work once performed by humans, how will it be possible to keep purchasing power?  In the past, wealth was redistributed through salary, and the salary was the focal point of the workers’ struggles and the union’s demands.  But what happens when income is no longer the central issue?  What new models of struggle and organization can we imagine?”

Emanuele is an artist, researcher and activist. In addition to his work at Macao, he co-founded the dance and theatre company Balletto Civile (2003), the contemporary art project Rhaze (2011), as well as Landscape Choreography (2012),an art platform questioning the role of the body under capitalism.  His research focuses on models of cultural production, processes of social transformation, political economy, labor rights and the institution of the commons. 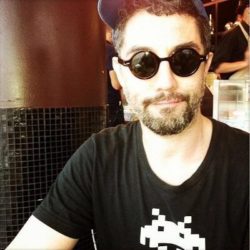