From Proof-of-Concept to Production

During Bitcoin Wednesday on 5 February, 2020, Ocyan CEO Evangelos Pappas will talk about the differences between building cutting edge pilot projects and delivering production-ready applications that can be used by large enterprises. Evan has had extensive experience with both types of development.  An engineer specialized in cloud computing and distributed systems, he has worked for corporations like Shell, Disney, Warner, GS1 and Clearscore, and has been involved in development with Bitcoin since 2012 and with Ethereum and Hyperledger since 2016.  With Ocyan he is actively involved in deploying and managing blockchain applications for tier 1 – tier 3 organizations in the FinTech, Logistics, Energy, O&G and Telecom industries.

“Although Bitcoin works 24/7, sometimes people slack off.  One of the fallacies of distributed systems is that we tend to forget it involves so many different people.

Anyone who has worked in an enterprise environment knows that bringing a PoC to production requires a whole different architecture paradigm, confidentiality, operability and scalability.  So what I’ll be describing is how you build scalable blockchain applications with real SLAs, and what trade-offs you need to consider.”

Evan’s presentation will include use cases and wireframes from some of his recent work.

Evangelos Pappas received a degree in Computer Science from the University of Wales.  In 2011 he launched a platform for SMS promotion in Greece that was similar to Nexmo and Twilio.  He previously worked as a software developer and served as a Blockchain Engineer for Shell. 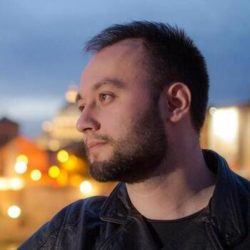