For Bitcoin Wednesday on 6 March, 2019 Frans Kempen of IBM will join his colleague Firat Sertgoz in a presentation about IBM’s approach to blockchain technology.  Frans will also be the session chair for the evening.  He was previously the session chair on 5 December, 2018, 3 October, 2018, 2 May 2018, 1 November, 2017 and for Bitcoin Wednesday’s 4-year Anniversary Edition on 5 July, 2017.

IBM has been heavily involved in blockchain technologies for many years, and claims to be among the first multinational companies to invest heavily in it.  IBM’s CEO, Ginni Rometti quipped a few years ago “What the Internet did for information, the blockchain will do for transactions.”  Since then, IBM has been building many enterprise-grade proof of concepts and minimum viable products, and is already operating a number of blockchain platforms in production.  In parallel with building enterprise blockchains, IBM is helping to form various industry consortia and to build new business models that monetize the data on the blockchain platforms.

For his talk at Bitcoin Wednesday on 6 March, 2019, Frans will explain how blockchain technology opens up new business opportunities in multiple industries and what real value it brings to the table from an enterprise perspective.  He will conclude his presentation with an overview of notable industry consortiums and the lessons learned from consortium build models.

From his extensive involvement in diverse enterprise projects across many different industries, Frans sees how enterprise blockchain initiatives are playing an important role in the eventual adoption of the technology.  For example, he already sees distributed ledger technology as a key enabler for Digital Transformation Programs in the financial sector.  He believes that permissioned and permissionless blockchains can and will continue to co-exist in the domain, satisfying different use cases and bringing the sector forward.

Frans has been with IBM for more than a decade, and is IBM’s Blockchain Lead for Logistics and Supply Chain Services at IBM Netherlands.  In addition, he is managing two blockchain delivery programs in the Supply Chain industry that are slated to go into production at the end of 2019.

Before coming to IBM, he was able to combine his technical and commercial background in roles with Unilever, KPN and British Telecom.  For example, he was involved in developing the first free Internet Service Provider at KPN, and deploying a cloud services platform at British Telecom.  In 2006 he joined IBM and became responsible for its business in the Publishing and Communication industry, and in 2010 he began to lead IBM’s Microsoft practice.  Since 2015, he has had a keen interest in Distributed Ledger Technology and related cryptocurrencies.  He set up the Blockchain Practice at IBM Netherlands in order to deliver these solutions to IBM’s enterprise clients.  He earned a degree in Civil Engineering and a degree in Business Economics at Erasmus University. 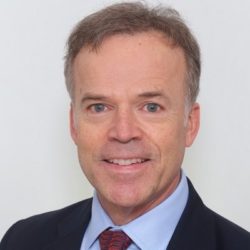