His solution — using Ethereum smart contracts to buy and rent unused PC resources on demand — raised more than $12 million in less than 3 hours on 19 April 2017. During Bitcoin Wednesday on 3 May 2017, he will introduce the iEx concept, present the platform and show the first results from their Proof of Concept.

In an article published by TechCrunch in December 2016, Gilles referred to the growing demand for computating power to support large applications and heavy data crunching.  He named product simulation, deep learning and 3D rendering as areas with rising demand for expensive computing resources.

iEx’s goal is to provide more affordable secure, scalable access to the computing resources and data sets required in these industries.  Its virtual cloud infrastructure plans to offer decentralized marketplaces where just about anyone can rent their computing resources — i.e. spare CPUs and GPUs — and where innovative enterprises that offer Big Data and high performance computing applications can sell them online.  With iEx.ec it would also be possible to rent the use of data-sets on fine-grained access conditions.

Gilles writes, “Moreover, since the blockchain provides distributed consensus and resiliency while being fully distributed, we think that it’s going to drastically change the way we design distributed systems and applications.”

Dr. Gilles Fedak has been a permanent INRIA research scientist at ENS-Lyon, France since 2004.  He earned a Ph.D. from the University of Paris Sud in 2003, which he followed with a post-doctoral fellowship at University of California in San Diego from 2003 – 2004.  His research is directed toward Parallel and Distributed Computing with an emphasis on data-intensive and high performance computation supported by large and loosely coupled distributed computing infrastructures.  He has produced software and algorithms in the field of Grid and Cloud Computing that allow people to easily harness large parallel systems composed of thousands of machines distributed across the Internet (i.e. XtremWeb, MPICH-V, BitDew, SpeQulos, Xtrem-MapReduce, and Active Data). He has co-authored about 80 peer-reviewed scientific papers and won two Best Paper awards. In 2012, he co-edited The Desktop Grid Computing Book, (CRC publication) with C. Cérin, and in 2015 he received the Chinese Academy of Sciences PIFI Award. 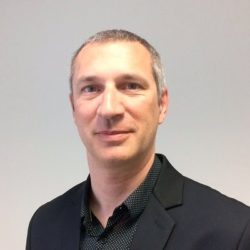