Fundraising is arguably one of the areas where the blockchain revolution has had its greatest impact to date.  The number of projects that have raised millions of dollars through crowd-funding-style token sales is one of the biggest stories of the last few years.

For Bitcoin Wednesday on 3 May 2017, Bancor CEO Guy Benartzi will talk about how Bancor’s technology aims to make it easy for anyone to conduct a crowd sale.

Guy has been active in the blockchain sector since 2012, and has helped introduce numerous local currencies, including Ithacash in New York and Heart Market in Tel Aviv.  He was previously founder and CEO of the multiplayer game company Mytopia which was acquired by 888Holdings in 2009.

During the Special Edition of Bitcoin Wednesday in Amsterdam on 12 April 2017, 13 April 2017 in Tilburg and 14 April, 2017 in The Hague, Guy gave a series of presentations about this phenomenon.  He spoke about:

• The advantages and risks of crowd sales compared to alternative funding sources;

• Who is buying so many new tokens and why are they doing it;

• How to make sense of the boom we are witnessing;

• How crowd sales are different and why only a few really get it; and

• Is it a passing fad or a killer app for blockchain tech?

If Guy has his way, you won’t need to be a software engineer or to hire one in order to launch your own digital currency. The Bancor protocol aims to make it easy for small projects, including local community coins, to launch their own tokens. Bancor is designed to provide continuous liquidity for tokens, even for those with very small trading volumes.

During the CoinFest edition of Bitcoin Wednesday on 5 April 2017, Guy and his colleague Eyal Hertzog, the chief of product design, introduced Bancor. Their talk covered:

What Problems Are Solved By Bancor Protocol? 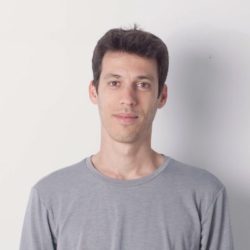