Hans de Zwart previously gave a keynote at Bitcoin Wednesday in August 2015 in which he mentioned possible links between Bitcoin and current Dutch digital rights issues like the newly proposed bill on the secret services, the hacking proposal for the Dutch police, copyright enforcement, data retention and net neutrality.  The landscape has changed significantly since then:

Anti-money laundering and anti-terrorist financing laws have been applied to digital currencies in an expanding number of countries, including the EU;

Growing interest in cryptocurrency has led to a much wider adoption of public key encryption and the popularity of anonymous blockchains like Monero, Dash, Zcoin and Zcash;

$3.7 billion in funding was raised for new decentralized software in 2017;

The Trump White House announced plans to dismantle net neutrality in the U.S. which has sparked some of the largest online protests in history; and

The Dutch Intelligence and Security Services Act 34 588 (or Sleepwet) was passed that would allow for untargeted monitoring of private communications on a massive scale.

Thanks to the work of a group of students The Netherlands will now hold a referendum on Sleepwet during the upcoming municipal elections on 21 March, 2018.

Before coming to work for Bits of Freedom Hans de Zwart was Shell’s Senior Innovation Adviser for Global HR and Learning Technologies, and before that, a Moodle consultant for Stoas learning.  At the start of his career he was a physical education teacher at a high school in Amsterdam.

At the helm of Bits of Freedom he has become a leading proponent of digital freedom on the Internet in The Netherlands.  At Bitcoin Wednesday we’ve frequently seen this growing support for digital freedom carried over to a lion’s share of the innovation that has arguably made Amsterdam and The Netherlands a successful innovator in our own industry. 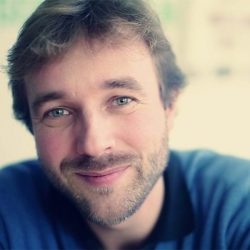