Henrik Hjelte is the CEO of Chromaway, the company built from the open source Colored Coins project. Colored Coins is widely known as the world’s first Bitcoin 2.0 implementation, done by Alex Mizrahi in 2012, who became ChromaWay’s CTO when the company was founded in 2014.

At Bitcoin Wednesday on 2 September 2015, Henrik will talk about ChromaWay’s work with LHV Bank to put Euro tokens called Cuber on the Bitcoin network.  This implementation will possibly be one of the first and largest Bitcoin 2.0 projects undertaken by a European bank.  Besides this, ChromaWay is also working on colored coin-based marketplaces for tickets and startup equity.  Henrik will discuss these examples in the context of what he believes to be emerging best practices for the correct way for developers, entrepreneurs and financial institutions to work with the Bitcoin blockchain without jeopardizing its financial and security benefits.

Henrik has been developing software professionally since the 80’s with a break to earn a Masters degree in Economics from the University of Uppsala in Sweden.  Before coming to ChromaWay, he worked on financial software, sports betting applications and a search engine platform.  He was introduced to Bitcoin and Colored Coins in 2013. 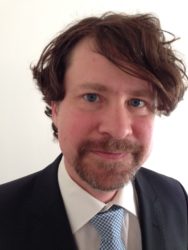