The Future of Identity and Community: A Trip from CAcert over African Chamas to Blockchains

Current approaches to digital identity all fall short. Either they violate privacy or they are easy to hack. To form a distributed community on the Internet we need both identities and trust.

For Bitcoin Wednesday on 7 February 2018, Ian Grigg will give a presentation on how to build trust-deep community structures that provide identity.

Ian Grigg is one of the earliest pioneers in financial cryptography.  In 1995 he built one of the first cryptographically secured systems to issue or trade any kind of asset.  He created the Ricardian Contract, a secure approach to registering the intent of a legal agreement in a system like a work of software, and also co-invented triple-entry accounting, an early form of distributed ledger.  He has said that many of the most influential ideas in the industry were first conceived in those times:

Shared ledgers, triple entry, proof of work, smart contracts, social reputation systems… all had their airing in the 1990s.  Yet we were all independently “too early” which is basically a poor excuse for not quite cracking the problem.

Ian has recently worked with R3, the bank-driven consortium that aims to bring blockchain technology to finance, and block.one, the founder of smart contract platform EOS, which raised $700 million in one of the largest coin sales in 2017. 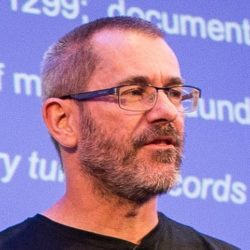