Bitcoin Wednesday welcomes Iddo Bentov, Chief Scientist of Spacemesh to its New Year’s conference on 2 January, 2019.  Spacemesh is a new block design, a layered DAG (Directed Acyclic Graph) that aims to solve the challenge of scalability without sacrificing decentralization or security.  The Spacemesh team closed a $15 million series A funding round led by Polychain Capital in September 2018 in order to implement the network its creators say will be capable of efficiently supporting smart contracts and ASICs-resistant mining on a global scale.

Our global protocol allows the ledger to “self-heal” from arbitrary violations of the security assumptions, reconverging to consensus after the assumptions hold again. The mesh is also designed to be race-free: there is no “race” to generate the next block and honestly-generated blocks are always rewarded. This property, which we define formally as a game-theoretic notion, makes the protocol incentive-compatible and satisfies linearity of rewards.

A PoST allows a network participant known as a “prover” to convince a “verifier” that she has spent a “space-time” resource (storing data over a period of time). A rational PoST assumption implies that it is more profitable for a miner to use the lower-cost space-time resource over CPU work. Compared to PoW, PoST requires less energy use, as the difficulty can be increased by extending the time period over which data is stored without increasing computation costs (with a market-based mechanism for readjustment).  Nevertheless, PoST retains some useful properties of PoW, and therefore has certain advantages that other energy-efficient mechanisms (in particular Proof of Stake) lack.  This is joint work with Julian Loss and Tal Moran.

Iddo Bentov is a postdoc at Cornell University, and author of many academic papers on cryptography and cryptocurrency. He has been involved with Bitcoin since mid-2011, and more recently in ventures such as Spacemesh and StarkWare. 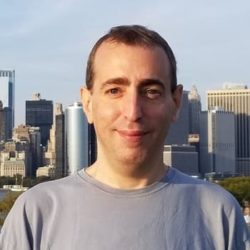