Indrė Leonavičiūtė is a User Experience (UX) designer living in Amsterdam. After graduating with a Bachelor’s degree in Information and Communication she initially worked as a journalist in Lithuania. However to pursue her dream career in IT, she moved to the Netherlands in 2015. In the summer of 2016 she received a Master’s diploma in Information Studies and Human-Centered Multimedia from the University of Amsterdam.

Indrė’s first encounter with digital currency was in the spring of 2016 while doing an internship at the Waag Society Institute for Arts, Science and Technology. The Waag Society was concerned with digital identity, representation and data safety. Indrė was enthusiastic about the potential of the sharing economy. The result was her Master’s thesis “Designing To Facilitate Genuine Accommodation Sharing: Identity and Reputation Verification”. Her goal in this project with the Waag was to create a prototype for an accommodation sharing platform alternative to Airbnb that would keep personal data secure. This project lead Indrė to be a frequent guest at Bitcoin Wednesday and to go deeper into the world of Bitcoin and the blockchain.

The goal of her research project was to focus on UX. As a designer and journalist she was curious to see how users would react to a new accommodation sharing platform that was inspired by the Blockchain and DAOs. Understanding how trust works was crucial in all phases of her research: literature, interviews and workshop. Indrė organized an open design workshop called “Designing for Trust in Accommodation Sharing” in the Waag. The result was an early stage interface for an application called “Houseweb”.  During Bitcoin Wednesday on 2 November 2016, she will present some of her findings.

Indrė likes observing the cryptocurrency world from a UX perspective. She gets inspired by technical ideas and wants to test how those ideas are seen and experienced by users. She finds aiming for intuitive and simple design for upcoming technology such as Bitcoin both challenging and exciting. 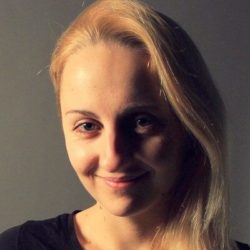