On 4 March, 2020, Bitcoin Wednesday will host a question and answer session with Blockchain Identity expert Jacob Boersma.  Jacob is a pioneer in the subject of decentralized identity and blockchain tech.  He gave a talk at Bitcoin Wednesday in 2014, but his career in digital identity, authentication and authorization dates back even earlier, to 2000.  Since then he has handled subjects such as public key infrastructure and security, digital signatures, online payments, e-banking and encryption.

He was the founder of Deloitte’s blockchain practice in The Netherlands, and led the development of strategy and technology for their blockchain team for four years.  Before that, he served as advisor and consultant in digital identity for PriceWaterhouseCoopers, Innopay and ICTU.  He has been directly involved in the development of identity and blockchain-based applications for a diverse group of clients, both in the public and private sectors and is an authority on the subject of self-sovereign identity in The Netherlands and the EU.  Jacob is a Certified Information Systems Security Professional with a degree in Science and Policy from the University of Utrecht. 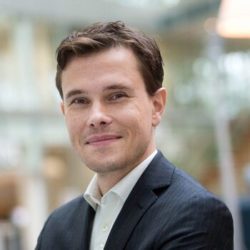