Coming from Shanghai ShellPay CEO Jane Zhang will present her SkyLedger token projects and talk about tokenomics at Bitcoin Wednesday on 1 August, 2018. SkyLedger is the Skycoin equivalent to Ethereum’s ERC20 tokens.

With a development history dating back to 2013, Skycoin is an ambitious project that features a web of trust consensus algorithm called Obelisk and private transactions by default via the coinjoin protocol.  It is releasing dedicated hardware known as Skyminers so that its network can eventually run completely independently from traditional ISPs.  The project has a market cap of nearly $56 million as of July 2018.

Jane calls ShellPay “a great social experiment”.  Her project was selected by the Dubai government to join the Spring 2017 Program of Dubai Future Accelerators, through which the team developed a blockchain-based Passport Control solution for the national Immigration Office.  Among Shellpay’s products is a hardware wallet and a decentralized exchange based on the Skycoin blockchain platform.

Before founding ShellPay, Jane Zhang was a serial entrepreneur and an early investor in Alibaba, UTStarcom and the NYSE-listed company VIPS.  She holds degrees from both Georgetown and Fudan University. 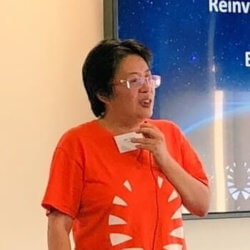