The program for Bitcoin Wednesday #24 includes our first look at the use of virtual currency inside video games by Jasper Damman.

Jasper is a game designer for game development company Everdreamsoft, which holds its headquarters in Geneva, Switzerland. This company specializes in producing casual and online trading card games for mobile and is active in exploring how to bring new technologies like NFC and geolocation to the game industry.

EverdreamSoft’s most popular game is a free-to-play trading card game called Moonga that is available on iOS and Android. Since the game’s launch in 2010, more than 250,000 people have registered for it. Building on this experience with the help of a global network of renowned illustrators, EverdreamSoft is now working on a series of new casual and trading card games as well as adding bitcoin integration to its titles.  It accepts Bitcoin payments for all of its services.

Jasper studied interaction design as well as game- and user experience design at the University of Amsterdam. He also previously worked for the Amsterdam-based creative agency Fonk. Jasper’s current focus is on strategy and puzzle games for mobile devices. At Everdreamsoft he is involved in game design and website building for a new trading card and arcade game called Spells of Genesis, which has an in-game economy and storyline based on Bitcoin and the blockchain. He is also responsible for the crowdsale and social media presence for this game. 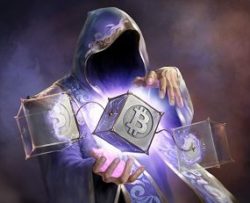