For all the hype around the concept of smart contracts, it’s not often that we get an opportunity to learn about them from a real expert.  For Bitcoin Wednesday on 3 October, 2018, Jelle Herold, the CEO of Statebox, will present what he calls “the first public demo” of the Statebox visual process language along with many of its advantages.  Those who attended Bitcoin Wednesday on 2 August, 2017, will recall Jelle’s excellent early demo of modelling smart contracts using the Statebox process language that he created.  In this repeat appearance, we’ll see how much the project has progressed over the past year.

Jelle writes, “The Statebox team has been building a formally verified process language using robust mathematical principles to prevent errors, allow composability and ensure termination.  Since the language is visual, it allows users to inspect the flow of the program during its execution.  These properties make Statebox suitable for distributed systems, blockchains, workflow management systems, application orchestration and system architecture.”

According to Jelle, Statebox is a radically different way to build smart contracts.  It is inspired by modern physics and mathematics.  During his short presentation Jelle will quickly introduce Statebox and explain why we should use it.  He will give a couple of examples of the basic structures of the language, including types, processes and folds.  Then he will give a demo, and finally, he will talk about his plans for Statebox.

Jelle is a creative thinker and hacker with a background in art, mathematics, physics and computer science. He wrote one of the earliest smart contract implementations pre-blockchain and is the author of Statebox, a new logic-programming language for smart contracts that can be deployed across blockchains. He has a decade of experience in leading open-source software development and a degree in Artificial Intelligence from The University of Utrecht in The Netherlands. Over the last three years he has participated in and won various hackathons, such as “hack4good.”

“Instead of text-based instructions telling a smart contract how to achieve certain behaviour,” Jelle explains, “Statebox contracts are represented as diagrams. Through these diagrams you declare what can, did and might happen to the contract.

With Statebox, end-to-end correctness proofs are a fundamental design principle, not an afterthought: the core is a mathematically clean structure that facilitates reasoning about its behaviour.  Diagrams can be combined to create bigger images, preserving the properties of each of their components, such as termination guarantees.  This way the contracts are easier to understand, build and inspect. 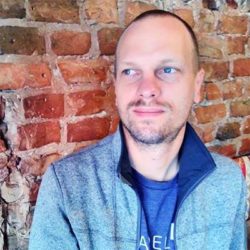