During Bitcoin Wednesday on 6 March 2019, Jenna Pilgrim of Chicago-based Bloq will talk about the Metronome Project, and give an overview of some other BloqLabs initiatives currently in development.  Jenna’s presentation is titled “Metronome: The Built-To-Last Cryptocurrency”, and her talk will also include results of several enhancements to the project which were recently introduced by the Bloq team.

Metronome, a cryptocurrency launched by pioneer Bitcoin developer Jeff Garzik in 2018, is designed to be stored across many blockchains.  It currently has a market cap of just under $9 million.  Its cryptocurrency protocol is based on four immutable contracts based on an underlying smart contract platform which was originally incubated by BloqLabs.  At launch in June 2018, the Metronome blockchain was fully functional.  Bloq received a one-time distribution of 2 million Metronome tokens (MET) which are locked up and gradually released over the course of 3 years in return for its work on creating the project.

BloqLabs is Bloq’s research and venture studio for blockchain tech that aims to stimulate innovation between multinational enterprises and the open source community.  It serves as a key technical contributor, financial sponsor and advisor to many projects in the industry.  It supports new initiatives first, by helping to launch new companies, and second, by integrating the most successful ventures into the product line of Bloq, which is BloqLab’s mother company.  Bloq itself provides blockchain infrastructure for the enterprise market.

Jenna is Bloq’s Director of Partnerships and Business Development as well as Co-Founder of Streambed Media, which is building a blockchain-based solution for Internet content.  Before working for Bloq, Jenna helped found Don and Alex Tapscott’s Blockchain Research Institute in Toronto.  She started her career at the Tapscott Group in 2015 as the P.R. specialist behind the Tapscott’s best-selling book, Blockchain Revolution.  Then, in her role as Director of Business Development for the Blockchain Research Institute, she helped raise over $5 million from companies and governments worldwide for strategic research into blockchain application and implementation challenges.  In Toronto she also co-founded two network organizations to facilitate the growth of the blockchain industry in the region, “In Crypto”, an informal cryptocurrency founder’s club and “Bridging the Gap”, an initiative for greater diversity among founders in the sector that helps connect them to investors.

Jenna speaks regularly at conferences on blockchain, cybersecurity, regulation, fintech, big data and business strategy, and earned a degree in business administration from Ontario’s Trent University. She co-founded her first company when she was 18. 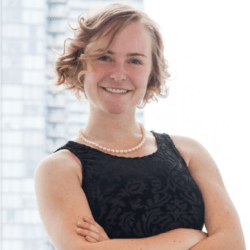