Jim Blasko of Bitcoin Talk Radio will be the Session Chair for Bitcoin Wednesday on 2 August, 2017.  Jim is co-founder and chief cryptographer at CryptoMarket, a cryptocurrency-based e-bay; bCommerce Labs, an incubator for blockchain projects; and Aspire, his solution for blockchain asset creation. He was the creator of Unbreakable Coin, which was recently one of the most profitable coins in the world to mine.  He is also a developer for Voxels, one of the first cryptocurrencies for VR, eBoost, one of the first cryptocurrencies for esports, and the upcoming Guardium token.

Jim lives in Las Vegas, Nevada.  The first time he heard about Bitcoin he happened to be mining the old-fashioned way, digging for gold with a shovel and metal detector in the Nevada desert. 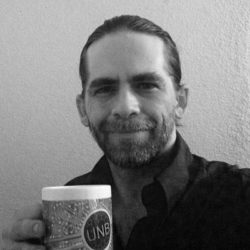