The threat of quantum computing to cryptography is real.  During Bitcoin Wednesday on 3 April, 2019, Jin Liu, the Chairman of ABCMint, will talk about the growing risk, including the state of the art in quantum-resistant blockchain tech and what the industry will have to do to implement it successfully.

In 2015 and 2016 both the National Security Agency (NSA) and National Institute of Standards and Technology (NIST) announced their intention to transition to quantum-resistant algorithms.

There is growing research in the area of quantum computing, and enough progress is being made that NSA must act now to protect NSS by encouraging the development and adoption of quantum resistant algorithms.

Jin’s ABCMint Foundation is dedicated to globally supporting the research and application of post-quantum cryptography for blockchain technology.  His presentation will cover the following topics:

Bitcoin must become quantum proof within the next several years or it may face its biggest threat from a quantum attack in the future.  Cryptocurrencies like Bitcoin rely on ECC digital signatures and number theory-based public key cryptography, which is used to ensure the integrity and security of the blockchain.  Quantum computers pose serious threats to cryptosystems such as RSA and ECC, so the need to develop and deploy quantum-resistant technologies is quickly becoming a reality.

Cryptocurrencies like Bitcoin are new financial instruments which are created to make financial transactions more efficient, cheaper, and decentralized.

The mainnet for ABC, a Proof-of-Work post-quantum cryptocurrency, was officially launched in June 2018.  To begin mining ABC, you need to correctly install Ubuntu16.04+CUDA9.2 and Nvidia GTX1080TI, or GTX2080 (TI). and refer to the ABC website for instructions.

Jin was an angel investor between 2008 – 2017 and has been a mentor and board member for more than a dozen different mobile Internet startups.  He also served as Chief Strategy Officer for 5 early stage companies.  He often advises startups to “Stay alone, stay away” to maintain an independent path, “Think further, think slower and move fastest,” “Walk in the other’s shoes”, “Look for a win-win” and “Have a plan C.”  In his spare time he runs marathons, reads books about history, and cooks for his family. 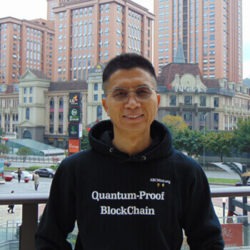