Jintai Ding, Professor at University of Cincinnati and Vice Chairman of ABCmint

During Bitcoin Wednesday’s 6-year anniversary edition on 3 July, 2019, Jintai Ding, Professor of Mathematics at the University of Cincinnati and Vice Chairman of ABCmint, will give an introduction to public key cryptography and to digital signatures in post-quantum cryptography.  Professor Ding believes that quantum computers represent a potential lethal threat to Bitcoin in its current form, and has helped create the ABC cryptocurrency in order to develop, test and fund a quantum-proof solution.

Professor Ding writes, “In my talk I will explain the design rational behind ABC, a new quantum-proof PoW cryptocurrency as well as the key cryptographic problems we must resolve.”

Jintai Ding helped develop the Rainbow cryptographic algorithm, one of the 9 finalists currently considered by the NIST in its post-quantum cryptography standardization process.  Rainbow is also implemented by ABCmint.

Professor Ding was previously involved in the development of the GUI HFEV-signature, the Simple Matrix encryption and the LWE-based key exchange schemes.  He was a Co-Chair of the second international workshop on PQC.  He received a BA from Xian Jiaotong University in 1988, an MA from the University of Science and Technology of China in 1990 and a Ph.D. from Yale in 1995.  He was a Lecturer at the RIMS of Kyoto Univeristy from 1995 to1998 and a Visiting Professor and A.V. Humboldt Fellow at TU Darmstadt from 2006 to 2007.  He received the ZhongJiaQing Prize from the Chinese Mathematics Society in 1990.  Before turning his focus to post-quantum cryptography, he conducted research on quantum algebras and was credited for Ding-Iohara-Miki algebra. 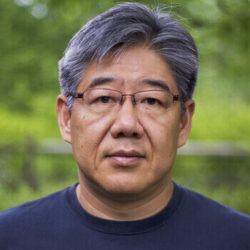