During Bitcoin Wednesday on 2 May 2018, João Martins, VP of Business Development of Birdchain, will demonstrate the latest release of the decentralized app that rewards its users by converting their unused SMS to cryptocurrency.  The software consists of a decentralized wallet and a built-in instant messenger, which its developers believe will accelerate adoption of cryptocurrency for new audiences.

Reaching the softcap for our project encouraged us to accelerate development of the dApp, to hire blockchain specialists and to begin to work more closely with our advisors.  It soon became clear that we could expand the project by building tools to asses the SMS delivery rate and providing statistics in order to give much-needed transparency to the industry.  Now all Birdchain users, both aggregators and operators, can see the delivery rate and speed of each SMS route they are using.

These statistics are derived from a feature that monitors the effective reception of the SMS in real time, allowing everyone in the SMS industry to have a reliable feed of speed and delivery rates of the SMS routes.

Birdchain is a project of Vertex, an agency based in Vilnius, Lithuania that develops mobile solutions including applications for SMS. Birdchain has raised more than $1.4 million in the first few days of its token sale, which will run until the end of May.  The company has more than 10 years experience in the SMS industry, a sector that Vertex believes is ready for blockchain-based disruption.  SMS is built into every single mobile phone throughout the world and doesn’t require Internet.  It is commonly used for temporary passwords and for confirming reservations and deliveries. Businesses can pay up to 0.08 Euro cents per SMS, so that sending thousands of these messages per day can be expensive.  At the same time, the average mobile phone owner has free SMS in their monthly subscription plans that they do not actually use.

Birdchain aims to reward users for contributing their unused SMS, so that the messages can be sent by businesses who need them.  Blockchain technology allows full transparency to Birdchain’s business clients, so that they can verify exactly when an SMS was used and how much it cost to deliver it.  Cryptocurrencies provide the way for Birdchain to easily pay the users for their unused SMS.  The team also plans to open their Birdchain app to Third party application developers and paid content providers.

João Martins joined the Birdchain team in mid-2017, just as the project was getting started, and has been responsible for defining and communicating the concept to users and industry players from both the cryptocurrency and telecommunications industries.  Before coming to Birdchain, he contributed to another cryptocurrency service based in Vilnius, Spectrocoin, which allows users to buy and sell Bitcoin.  He also previously worked in the personal credit and credit card department of one of the biggest banks in Portugal, Millenium BCP.  He studied architecture at the Luisada University in Porto, Portugal.  He gave an introductory presentation of Birdchain at Bitcoin Wednesday on 7 March 2018. 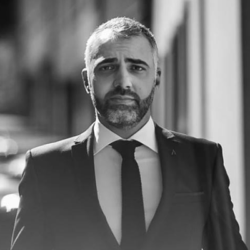