Jouke Hofman is CEO of the Dutch Bitcoin exchange Bitonic.  During Bitcoin Wednesday on 2 September 2015, Jouke will present Bitonic’s position on the XT fork and block size conflict and what it means for the future of Bitcoin.

Bitonic is one of the first and largest companies of its kind in The Netherlands.  It was originally launched in 2012 by Jouke and two of his friends from high school, Robert de Waard and Niels van Groningen.  Their team is based in Baarn and now operates with 11 people.   Bitonic was originally founded to provide a way for people to quickly and easily buy bitcoins using the IDEAL online banking service.  Through IDEAL they have sold more than 175,000 bitcoins to thousands of unique customers.

They also provide consulting and merchant services and list ABN Amro, SNS Bank and ING Bank as their customers.  More recently, under the name Bl3p, they have begun delivering a trading platform for Bitcoin where they hold both euros and bitcoins for consumers.  When Bitonic applied for a Payment Service Provider license to the Dutch Central Bank, they received an official response that such a license was unnecessary, allowing them to proceed with Bl3p. 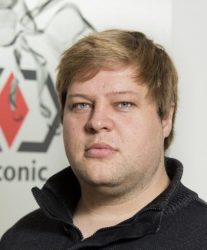