Justin Bons, from Cyber Capital will Present State of Cryptocurrency

In addition to Justin’s role at Cyber Capital, he is a miner and trader.  After some early successes with cryptocurrency investment, he decided to devote himself to the field full time.  He currently focusses on “fundamental analysis” of cryptocurrencies, analyzing the factors he considers to be especially important for investment: game theory, token distribution, governance and degree of innovation. Justin also specializes in researching governance models, and is an active participant in some of the major debates in the industry.  He is also a voting member of Bitcoin Unlimited, and an outspoken proponent of large blocks.

He previously studied music and audio engineering and worked as a live sound engineer for several years.  After that he earned a degree in political philosophy and history at Auckland University in New Zealand, and moved to The Netherlands to manage a tourism business for his family.

Justin is a frequent contributor to Bitcoin Wednesday.  He served as session chair on 6 June, 2018 and at the CoinFest edition on 4 April, 2018.  For Bitcoin Wednesday’s Special Edition on Crowd Sales on 12 April 2017, he gave a presentation about his fund and its approach to new tokens.  He also talked about his perspective on the dramatic rise in the number of token sales in the first half of 2017 and whether this is a short-lived bubble or just the start of a paradigm shift away from traditional funding sources.

On Friday, 2 December 2016 Justin spoke during Bitcoin Wednesday’s workshop on governance and the blockchain held during MoneyLab at Pakhuis de Zwijger.

Justin was also a moderator of a similar debate about the fork between Ethereum Modern and Ethereum Classic held during the Bitcoin Wednesday conference on 3 August, 2016.  As a result of the decision by Ethereum core developers to go back on their promise of immutability in order to fix a flaw in a $160 million-dollar smart contract, there are now two blockchains where before there was one.  Soon after the fork the two Ethereums were the two biggest digital currencies after Bitcoin with market caps of $860 million and $218 million respectively.  Ethereum Modern, the original chain, previously had a market cap of about $1 billion dollars.  Are two chains better than one? 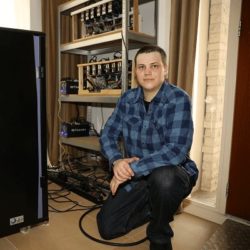