How To Prove You Forgot Something

Absence of Evidence and Evidence of Absence: A GDPR Love Story

Out with the old, in with the new.  Bitcoin Wednesday continues its traditional New Year’s reception on 2 January, 2019 with a modern twist on the Scottish folk song Auld Lang Syne.  The EU’s General Data Protection Regulation (GDPR) grants each person the right to be forgotten so that every individual can decide what personal information he prefers to save and what he wants never to be brought to mind.  Transmute Industries’ CEO Karyl Fowler has taken that principle to the distributed ledger and will show how the latest technology can be used to verify that any piece of data actually has been forgotten.

As security breaches mount, the general public is taking larger interest in data, security, and the right to be forgotten, a concept codified in the GDPR.  The right to be forgotten has been correctly identified as a human right. It protects the desires of individuals to exercise autonomy over the course of their lives without being limited by past circumstance.

Karyl Fowler is the CEO and Co-founder of Transmute, a decentralized app engine for teams, which integrates enterprise cloud infrastructure and blockchain technologies.  She sees her role as that of a pragmatist in a world of DLT purists, but also believes that decentralized systems can transform the enterprise, build better businesses and secure a more just collective future.  She previously served as Business Development Manager and Marketing Director of chipmaker Novati Technologies and Economic Development Manager for the Austin, Texas Chamber of Commerce.  She earned her Masters in Technology Commercialization from the University of Texas at Austin and has an undergraduate degree from Southwestern University.

She loves meeting new people, learning new skills, and hearing new ideas which helps her form the kind of strategic partnerships that bring new technologies to market.  She spends her free time contributing to the future of DLT, participating in several open-source boards, and co-leading the Austin Ethereum meetup. 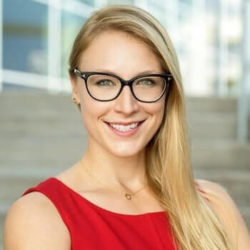