During Bitcoin Wednesday on 1 June 2016, Luis Molina will be here from Budapest to present Fermat.  Fermat is the new “Internet of People” that enables the P2P Economy — a new Internet that runs on smartphones and establishes a peer-to-peer economy free from centralized third parties.

A visionary and innovator, Mr. Molina was born in Córdoba, Argentina and started his career as a software developer in the financial industry in Latin America.  By 2000 he had founded a firm specialized in security and Internet banking systems.  In 2014 he moved to Budapest and founded Fermat.

Fermat is a decentralized, blockchain-enabled platform for the peer-to-peer exchange of goods, services, assets and data.  It is designed to be user-controlled, censorship-resistant and flexible.  It also facilitates micro-payments to authors of reusable software components.

Before settling in Budapest, Mr. Molina travelled to Morocco to research an iconic form of Arabic geometric architecture.  Fascinated by its beauty and complexity, he developed a system to automate the design of the non-repetitive Arabic patterns upon which the architecture was based, becoming the first ever to reproduce them with modern production technology.  He then formed a company in Dubai called Nomad Inception in order to bring these traditional Islamic features to modern architectural projects.  He has subsequently been invited to lecture on Islamic art all over the world.

He was in Dubai in 2013 when he first learned about Bitcoin and the disruptive potential of the technology.  One day, after he had handed his Arabic-inscribed business card for Nomad Inception to a local sheikh, he was told that just adding a single dot to his company name would translate to “bitcoin.”  His fate was sealed. 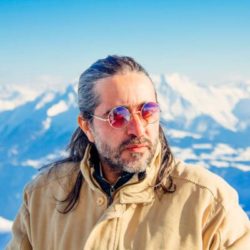