Manfred Karrer is the creator of Bitsquare, one of the first decentralized exchanges for Bitcoin.  Decentralized marketplaces and exchanges are considered one of the killer apps of the digital currency revolution, and now just beginning to attract attention.  During Bitcoin Wednesday on 4 May 2016, Manfred will explore the reasons why decentralization is essential for such an application and what features of Bitcoin are required to make it possible.  He will also give a short demo of Bitsquare.

In addition, his presentation will also cover the following topics:

Manfred Karrer is an Austrian software developer who lives in Barcelona.  He has been working on Bitsquare since early 2014. When he first heard about Bitcoin in early 2011 he fell instantly into the infamous Bitcoin rabbit hole and thought that Bitcoin is the most important and disruptive innovation since the internet (and still believes that). At that time he worked as a Flex developer on a trading application for a London-based financial markets company. In his search for work in the Bitcoin field he tried to find a solution for something that most people at the time said was impossible: A decentralized Bitcoin-Fiat exchange.

After a few months of research he began to implement a prototype that was later converted to a fully functional trading application. He has a professional background in UI development (Flash/Flex/iOS) and earlier online games.
He studied computer science, social anthropology and music. During that period of his life he was a musician and toured in Europe and Japan with his band. Much of that same creative spirit he re-discovers in the open source/commons/cryptocurrency field and is glad to be a part of it.  The social and political dimension of Bitcoin and cryptocurrencies is what interests him most. 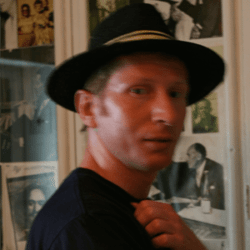