Marcel Roelants of BitPay will speak during Bitcoin Wednesday on 6 January 2016.  His presentation will be about how Bitcoin blockchain use cases are shaping the new digital world, including specific examples from BitPay’s experience of how real-world applications are further shaping Bitcoin developments.

Mr. Roelants is a member of BitPay’s global executive team, acts as General Manager for the EMEA region since 2015 and leads the company’s European headquarters in Amsterdam.  Prior to taking on these roles for BitPay, Marcel joined the company’s board of advisors back in 2014.

BitPay is currently the world’s largest bitcoin payment processor, serving more than 60,000 merchants on six continents.  The company was founded in 2011 as a way to make it easy for businesses to accept bitcoin payments.  In order to remain at the forefront of the technology, they currently aim to continue building open source software for innovative, next generation bitcoin tools and services.

Marcel is a veteran of the payments industry with broad experience of cards, mobile wallets and Bitcoin.  Before working for BitPay, Marcel managed a team of about 200 people at GE Capital, was the General Manager for MasterCard in The Netherlands and, most recently worked for SEQR, Europe’s most widely used mobile wallet.

Amongst other achievements, Marcel was responsible for growing MasterCard’s market share from 5% to 85% and led the introduction of the SEQR mobile wallet in the Benelux region.  For GE, he held roles in both consumer and commercial finance as well as services in Belgium, The Netherlands and Switzerland over a span of 18 years.

Marcel enjoys balancing structure with entrepreneurship, and in addition to his experience with large corporations, occasionally acts as a mentor for startups in Amsterdam 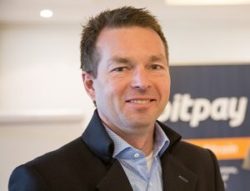