DAJIE Blockchain Solutions: a Distributed Ledger for the Internet of Energy

Bitcoin Wednesday on 5 October 2016 will feature Marco Sachy, aka “Radium”, the Blockchain designer for Dajie.  Marco will present Dajie’s distributed ledger solutions for the energy market which applies the Freecoin technology developed by the Dyne Foundation.

Dajie is currently a participant in Rockstart’s Smart Energy Accelerator.  The startup’s name is an acronym for Distributed Autonomous Joint Internet and Energy for everyone.  The company aims to deliver an affordable, modular, scalable toolkit for energy smart grids and the Internet of Things.

Marco is a PhD candidate in Critical Management Studies at University of Leicester School of Management with a thesis titled ‘Money as a Commons: Toward a User-managed Currency and Payment System Design.’ As a hacktivist, aka “Radium”, he co-authors a blog, Dyndy.net, where he explains his activities related to complementary currencies to a general audience.

Since the dawn of Bitcoin and the distributed ledger revolution, Marco has been a contributor to the Dyne Foundation as a Distributed Ledger Designer.  His work on the complementary-, crypto-currency toolkit Freecoin focuses on the nature of money, decentralized trust management and banking in order to expand what he views as the bottom-up people’s resistance against the unfolding violence of financial capitalism. 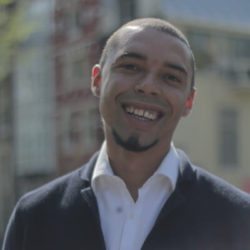