If you can imagine an open-source decentralized network that aims to disrupt Netflix for video on demand, Soundcloud for music publishing and Amazon for books, you might come close to the blockchain platform known as DECENT that is now under development.  The platform for sharing digital content raised $4.2 million during its crowd sale at the end of 2016, and plans to launch its network in the summer of 2017.

At the 4-year anniversary edition of Bitcoin Wednesday on 5 July 2017, DECENT CEO Matej Michalko will talk about what blockchain technology adds to the world of content distribution on the Internet. He will present DECENT’s vision, the advantages of decentralized publishing and blockchain-based content distribution, including: specific features of the DECENT Network, DECENT blockchain applications and future plans.  He will also give practical demonstrations of some important use cases in the digital content industries.

Matej studied computer science at the Swiss Federal Institute of Technology (EPFL) in Lausanne.  As a student, his interest in digital privacy was sparked by a privacy protection project for mobile devices that he completed for the Nokia Research Center.  In 2011 he became involved with Bitcoin, first mining on his own laptop, later switching to GPUs and ASICs.  He founded one of the first Bitcoin Marketing agencies and one of the sector’s earliest cryptocurrency e-gaming consulting firms based on the Isle of Man.  He is a regular speaker on the subject of blockchain integration in various industries.  In addition to his role as CEO of DECENT, he also serves as chairman of the board of the Blockchain R&D Hub. 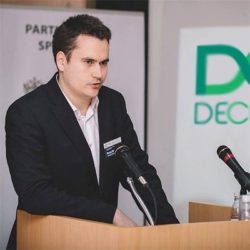