The Lisk App SDK: A JavaScript Framework for Blockchain Applications

On 3 August, 2016 Bitcoin Wednesday will feature a presentation on Lisk by its founder Max Kordek.  From its crowd sale in February 2016, which raised $5.8 million in just a few weeks, to its current position as one of the world’s ten largest cryptocurrencies, with a market cap of more than $31 million, Lisk has climbed to the top ranks surprisingly fast.

Good timing and a smart choice to create Lisk with JavaScript, the world’s most popular programming language, have likely played a part in this success.  The bitcoins that the Lisk team raised in February 2016 are worth more than $9 million just five months later.  The use of JavaScript, arguably the most important development language on the World Wide Web, helps make Lisk’s decentralized network accessible to an extremely large number of developers.

Mr. Kordek is a futurist and thoroughbred entrepreneur who is fascinated by disruptive technologies — for example, autonomous driving, artificial intelligence, blockchains, asteroid mining, and space travel.  No idea is too crazy for him.  Before launching Lisk he worked on its precursor, Crypti, from which it was forked.  Prior to that, he was the CEO of the Nxt Organization.  He has an engineering degree from the University of Aachen in Germany, near the border with The Netherlands.

Mr. Kordek’s talk will include:

Developers should note that one of Lisk’s main features is its blockchain application framework, the Lisk App SDK.  It can be used to implement new features, customize the sidechain and introduce new APIs. It allows developers to focus on improving their apps without having to worry about P2P, networking logic or consensus protocols.   Mr. Kordek notes, “This approach might not prevent badly written apps — we still need to focus on education and have great documentation ready — but at least we can avoid the risk of badly written protocols and consensus logic.” 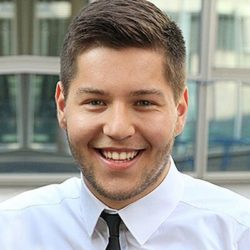