Possibly as much as any other, this new industry gives students the opportunity to innovate at the cutting edge of technology and society.  During Bitcoin Wednesday on 3 August, 2016 Nathalie Drost will talk about Bitcoin Wednesday’s new partnership with the Blockchain Education Network (BEN), and how we’ll be acting as the national chapter of BEN in The Netherlands. Those who attended Bitcoin Wednesday’s 3-year Anniversary at the Film Museum will recognize Nathalie as the conference moderator who introduced many of the speakers.

Nathalie just completed a Master’s Degree in Business Administration in Nijmegen that included the research project “Hybrid Banking: A Decentralized System with Intrinsic Multiple Mediums of Exchange” which also involved investigation into the Blockchain.  She says, “Of course I had heard about Bitcoin much earlier, but before I began actively reading about it, it remained a mysterious interest.  When I started my research at the beginning of this year that all changed.  From that moment on I started to learn, and every day I keep learning, more about Bitcoin and the Blockchain.  Every day it makes me more enthusiastic.  At this point I want to continue working with it, even though during my whole study I had a very different future in mind.”

Nathalie actively contributed to BEN, Bitcoin Wednesday and the Dutch Bitcoin Foundation, stichting Bitcoin Nederland between June 2016 and August 2016.  Her assignment was to investigate ways to “involve students and increase academic involvement”, a goal that received more votes than any other proposal that the Foundation received during its last public poll taken on 4 May 2016.

“I see this emerging industry as an area where young people can make an impact by exploring new ideas,” Nathalie says.  “I’d like to contribute to the Dutch Bitcoin Foundation in a way that inspires students to get involved and make an impact on the exciting developments in this field.

Through this journey I had realizations and made discoveries about the innovative potential of this technology that I would like to work on myself.  I believe that in order to build a future with better finance and more trust, we’ll need the involvement of students who can understand the problems and paradigm shifts and are able to push us forward toward everyday adoption one experiment at a time. 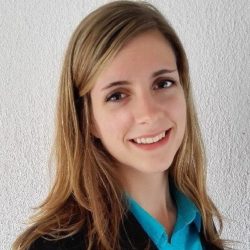