For Bitcoin Wednesday on 7 December, 2016, Nick Lambert, COO of MaidSafe will come over from Scotland to give an introduction to the Safe Network, a decentralized data and communications network.

MaidSafe is one of the earliest startups in the sector.  It was founded in 2006, and raised about $4 million in its early years, followed by an additional $7 million in 2014, raised in less than five hours in one of the industry’s first crowd sales.

After an extended development period, an early version of the MaidSafe service has been launched this year.  Its Safecoin digital currency enjoys a market cap of more than $35 million.

He will be joined by his colleague, Benjamin Kampmann, a developer responsible for education and outreach.

Nick started his working life in project management roles with IBM and Sanmina SCI before a change in tack led him into senior marketing positions with a diverse range of companies.  Now the chief operating officer of MaidSafe, he is responsible for the company’s finances, partnerships, marketing strategy, intellectual property and licensing.  Nick has an MSc in marketing and has spoken at several international events on the subjects of decentralization and startup funding. 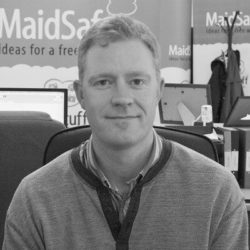