During Bitcoin Wednesday on 1 November 2017, we’ll hear from Nina Boelsums and Luca van der Kamp, two of the students who successfully staged the Sleepwet.nl campaign for a national referendum against the Dutch Intelligence and Security Services Act 34 588.  With the support of several NGOs, including Amnesty International, Nina, Luca and her team collected over 400,000 signatures passing the threshold for the national referendum which will be held during the municipal elections on 21 March, 2018.

This amendment to the Intelligence and Security Services Act 2002 (WiV) passed both houses of Dutch parliament on February and July 2017, and will go into force on 1 January 2018. Because technology has developed very rapidly since 2002, the old law needed to be updated. However, aside from justified updates, the new act dramatically increases the capacities of the Dutch intelligence services.  For example, it allows:

Nina and Luca write, “We would like to discuss our concerns with the renewed law, its impact on our human rights, and the harm it can bring to our free and democratic society.”

Nina Boelsums studies Industrial Design with a focus on the impact of new digital technologies on society. Luca van der Kamp has a degree in Computer Science and is currently studying logic, computability and complexity theory. 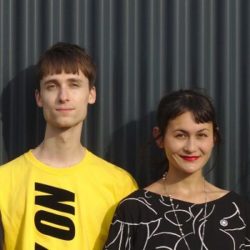