The World Economic Forum predicts that $10 Trillion in assets will be tokenized by 2028.  During Bitcoin Wednesday on 7 November, 2018, CEO Olga Feldmeier of Smart Valor will give a talk on this exponential growth in cryptocurrencies.  Her company Smart Valor is a marketplace for tokenized alternative investments licensed in Switzerland and Liechtenstein.  They have offices in Munich and Paris, but are headquartered in Zug, Switzerland, in the heard of the so-called “Crypto Valley”.

Olga also happens to be a founding member of the Crypto Valley Association in Zug, Switzerland, at the forefront of a Swiss cryptocurrency renaissance that has seen the country attract about 250 registered entities in the sector.  Switzerland appeared to be the world’s leading country during the ICO boom of 2017, though has recently lost some of the business — and related jobs — to Liechtenstein, Singapore, Gibraltar, The Cayman Islands and Malta.  Despite our efforts in The Netherlands, we won’t make the list until Dutch banks become less hesitant to open business accounts to cryptocurrency-related startups.

In October 2018 the Smart Valor marketplace launched an early access program for its investment platform for 5,000 users.  It aims initially to provide token distribution and exchange services for Venture Capital funds, real estate, young tech companies and fiat currencies.  However, pending a banking license in Liechtenstein, it plans to distribute security tokens across the 26 European countries.  Smart Valor was part of the Swiss-based Thomson Reuters Incubator.

Olga is a veteran of the financial services sector who has been a speaker at Money2020, the World Economic Forum and Consensus.  She has worked for Barclays Capital, UBS Wealth Management and Boston Consulting Group, where she contributed to projects at Deutsche Bank, Unicredit and Commerzbank.  Before founding Smart Valor, she was a Commercial Managing Partner at the Bitcoin wallet provider Xapo, based in Silicon Valley.  She is also currently a mentor at the largest European accelerator program, Kickstart Accelerator.

She grew up in Ukraine, where she experienced the hyperinflation of the 90s. She calls the tokenization of assets “a true game changer as it democratizes wealth and creates better liquidity and accessibility through its issuance and transfer on a permissionless blockchain.  A currency governed by math is a much better alternative to a currency mistreated by its incompetent and corrupt governments.”  Among her favorite topics are the difficulty of explaining cryptocurrencies to financial regulators, why the traditional financial sector should embrace cryptocurrencies, and tokenizing off-chain assets. 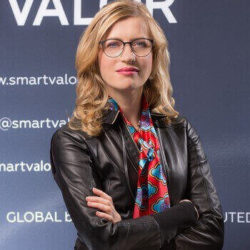