CEO and founder of Airwave.io Olivier de Jong will speak at Bitcoin Wednesday on 2 January, 2019.  Airwave is a decentralized communications network which aims to apply distributed ledger technology to peer-to-peer audio and video chat without compromising usability or privacy.  Airwave was initially launched in 2015 and was covered by The Next Web as a video conferencing platform for businesses, a secure version Skype that runs in a web browser without requiring the user to download additional software.

Olivier will talk about how his team transformed the original Airwave into its decentralized reincarnation and will also address the following topics:

Olivier is an autodidact who has focussed on software development, peer-to-peer technologies and decentralized systems. He has had experience running high-traffic software projects in both startup and corporate environments.  Before Airwave he worked for another online video startup and Youmine, a Dutch company that collected and aggregated special offers and daily deals like those offered by Groupon.  He has followed cryptocurrencies for more than 6 years and writes about the cryptocurrency industry and trading. 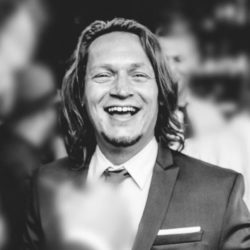