At Bitcoin Wednesday on 4 April, 2018, TV-Two co-founder Philipp Schulz will give a live demo of a project that aims to become a major gateway to broadcast television via the Ethereum blockchain.  Philipp’s solution is a glimpse into what the centralized world of television can become: an ecosystem that encourages direct interactions between consumers, advertisers and content providers on what could be a more transparent and fair playing field.

Incumbent TV networks and broadcasters currently enjoy a dominant position as middlemen in an industry where subscription costs are high and content is usually not personalized.  Advertizers support a $180 billion-dollar market, but have little influence over the technology.  Content producers feel forced to accept unfavorable contracts in order to compete with a broadcaster’s in-house productions.

The TV Ecosystem on the Ethereum Blockchain

TV-Two consists of an application for smart TVs that serves as a new gateway to a linear broadcast combined with a personalized video stream as an additional channel.  Smart contracts direct interactions between users, advertizers and content producers, and an ERC-20 token called TTV that is only issued during the crowdsale, will be medium of exchange throughout the ecosystem.

As a result, TV-Two users would be able to watch a personalized TV channel and could receive rewards for watching sponsored messages.  Independent content producers could gain better, more targetted distribution for their work and could finance their videos with ads. And, last but not least, advertisers could have better insight and transparency in their television budgets and could use their first-party data for their TV campaigns.

Before TV-Two, Philipp was a business consultant in Frankfurt and Hong Kong as well as a business development lead for Berlin-based retail analytics company, MiNODES.  He writes, “My mission is to bring the Ethereum blockchain into 700M living rooms around the globe with TV-Two.  I thrive on the chance to inspire and motivate my peers to accomplish great things together.” 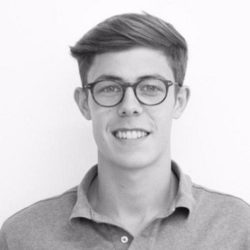