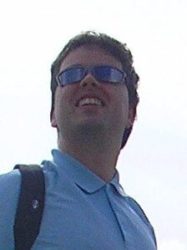 Corné Plooy is currently a software designer for Mapper Lithography, a company in the semiconductor industry, based in The Hague.   While Mapper Lithography has no involvement in cryptocurrency, Corné has worked indepedently on a side project, called Amiko Pay.  This side project is a solution for improving Bitcoin’s scalability that he will present at Bitcoin Wednesday on 1 July, 2015.  He explains:

Bitcoin promises freedom and radical decentralization, but it doesn’t scale to billions of users while retaining full decentralization.  Amiko Pay creates a payment network on top of Bitcoin, which maintains the desirable properties of Bitcoin, but is scalable, and also much faster and privacy-friendly than “vanilla” Bitcoin. Its design is very similar to the Lightning Network, but unlike that design, Amiko Pay can be implemented without requiring design changes to Bitcoin. An unfinished prototype of Amiko Pay can be downloaded from Github.

While my work in the semiconductor industry has no link to Amiko Pay that experience does allow me to give informed arguments about where Moore’s law is going to end, which is relevant to the Bitcoin scalability discussion.

Corné graduated from TU Delft with a Master’s degree in Applied Physics in 2009.  He is interested in many aspects of science and technology, and has experience developing different types of software, including computer vision software, websites, CAD/CAM, embedded machine control software and computer games.  For example, he is the developer of the open source racing game “Ultimate Stunts.”

He has has long been interested in technology that can protect civil rights like privacy and free speech; especially free software and cryptographic technology.  In 2009-2010, at the time of the introduction of the “OV Chipkaart” into the Dutch public transport system he began to think about more privacy-friendly alternatives for performing electronic payments, initially focusing on designs similar to that of Ripple.  In 2011 he realized that Bitcoin was growing extremely fast, and that Bitcoin and his own designs could be combined to solve both systems’ shortcomings.  In 2013 he completed his initial work on that design and started with the actual development of Amiko Pay. Corné now spends much of his spare time developing Amiko Pay.