For Bitcoin Wednesday on 3 October 2018, Dominik Zynis, a Co-founder of Wings, will present the latest version of the DAO platform for crowd sale evaluation and funding.  Dominik has been involved in the digital currency sector since 2012 and has many years of experience in various sales and marketing roles.  He currently works as Head of Comunications for WINGS Foundation, a forecasting and governance platform to create and manage DAOs based on Ethereum smart contracts.  The WINGS community is responsible for the evaluation of ICOs that represent more than $650 million in funding.

Before coming to WINGS, he served as Head of Business Development and Communications for one of the world’s first Bitcoin 2.0 platforms, Mastercoin / Omni.  He was previously an entrepreneur in Silicon Valley where he co-founded State Software in 2001, which was responsible for specification of JSON and the JSON libraries in use on the Internet today.  While in California he also worked for Oracle and Siemens in various sales and business development roles and was also the Director of Chloregy, specialized in corporate social responsibility and business sustainability technologies and practices.

Dominik studied Economics at Middlebury College in Vermont and received a Masters in Industrial Management and Economy from the BTH Institute in Sweden.  He believes decentralized cryptographic systems can enable systemic resilience, independence and freedom.

At Bitcoin Wednesday on 1 March 2017, Dominik Zynis gave a demo of the WINGS alpha system, showing how anyone can easily set up a project for crowdfunding and how members of the WINGS DAO will forecast the value of projects running on Ethereum.

At Bitcoin Wednesday’s Special Edition on 19 October, 2016, he explained the upcoming token distribution for the DAO-as-a-service platform known as Wings.  He was joined by his colleague, core developer Boris Povod.

During Bitcoin Wednesday on 6 July 2016, he gave a presentation about Decentralized Autonomous Organizations, or DAOs.  This subject made sensational headlines in June 2016 with the historic launch and subsequent failure of The DAO which was deployed by Slockit to the Ethereum blockchain. 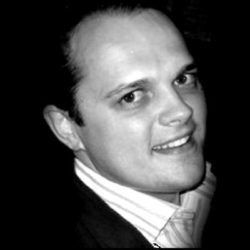