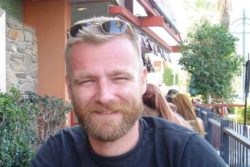 Martijn Wismeijer’s dedication to Bitcoin has gone so far as to motivate him to implant NFC chips with his Bitcoin wallets in both hands.  The operation earned him media coverage all over the world even beyond the attention he had already received as a Bitcoin evangelist and operator of Bitcoin ATMs.

Prior to that Martijn served as designer for one of the earliest bitcoin sites, a role he held since April 2011. Even earlier, he worked as a security consultant for Fortis Bank and networking specialist for KLM and management training center, De Baak.

At Bitcoin Wednesday #21 on 4 March, Martijn will talk about his new ManySWITCH product, which earned him a second-place finish in a recent hackathon.  ManySWITCH is basically an electro-mechanical coin acceptor replacement.  It modifies any existing coin-operated machine into a Bitcoin operated machine.  Martijn would like us to think of ManySWITCH as the missing link to enable a Bitcoin activated water-pump, coffee maker, pooltable, vending machine, and so on.  The idea is that if you can switch it, you can ManySWITCH it.

Martijn’s first implementation of ManySWITCH is in the Lucky Eggs vending machine.  The Lucky Eggs machine is over 30 years old.  It is a vintage capsule-vending machine in the shape of a chicken run.  Martijn selected this machine because he felt that the little red henhouse had such a strong vintage appearance that it would be a perfect example of how a new technology like bitcoin could be applied to vintage products to give them new life.  The converted Lucky Eggs Bitcoin vending machine dispenses BTC-related gadgets like bitcoin badges, golden, silver and copper bitcoin coins and bitcoin pins.

UPDATE 20 March 2015: Mr. Wismeijer has no association with Bitcoin Wednesday or the Dutch Bitcoin Foundation.